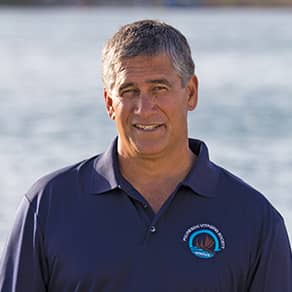 Canoe paddler and coach, Polynesian Voyaging Navigator, Longshoreman, and family man. These are the foundational blocks of one of Hawai‘i’s most inspirational watermen—Bruce Blankenfeld. Born and raised on Oahu, Blankenfeld grew up in Kuli‘ou‘ou, enjoying Maunalua Bay as his playground. It was not uncommon to find him either surfing, fishing, or canoe paddling in the bay with other notable watermen of their generation, including fellow navigator, Hawai‘i Waterman Hall of Famer, and brother-in-law Nainoa Thompson, as well as friend and mentor, Kala Kukea.
Since 1980, Blankenfeld has been arguably, one of the most influential figures at Hui Nalu Canoe Club. Competitive paddler and long­time coach, Blankenfeld achieved great success particularly in the 1990s when he was also a member of the Hawai‘i Canoe & Kayak Team, a perennial U.S. National Championship and Molokai Hoe World Championship contender. So trusted and respected by his peers, Blankenfeld remained as President of the Hui Nalu Canoe Club for over 20 years.
Around the same time (1977), Blankenfeld began his association with the Polynesian Voyaging Society by initially volunteering for the maintenance of Hōkūle‘a while training as a crewmate and eventually a navigator. In 1990, Blankenfeld began formal navigational training with Nainoa Thompson under the watchful eye of Master Navigator Mau Piailug.
After successfully completing many voyages throughout Polynesia, Micronesia, and the Pacific Rim, the Polynesian Voyaging Society began to chart its course on the way to its greatest endeavor—to sail across Earth’s oceans in an effort to join and grow the global movement towards a more sustainable world. This endeavor would become known as Mālama Honua, the Worldwide Voyage. Master Navigators Thompson and Blankenfeld would be tasked with rebuilding Hōkūle‘a for 30 more years of voyaging, organizing, charting, teaching, and navigating the oceans surrounding every livable landmass without the use of modern navigational instruments and only the complex understanding of the stars, the winds, the waves and other cues from nature. As a Captain Navigator and Mentor, Blankenfeld has been a critical catalyst in resurrecting indigenous wisdom of sailing and wayfinding just as his Hawaiian ancestors did generations ago, reawakening a cultural pride, identity, and an intimate connection to place. 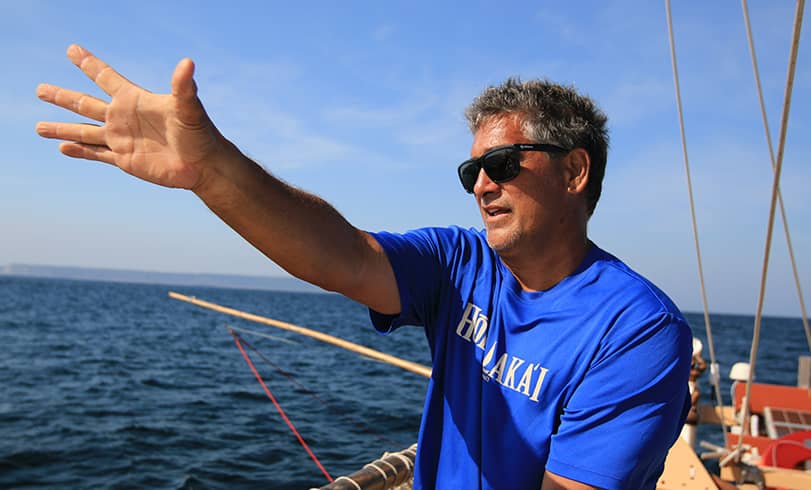