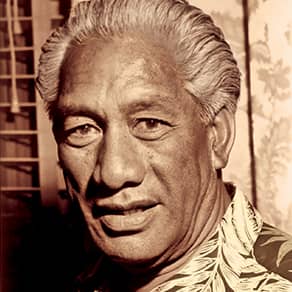 Duke Paoa Kahanamoku was born in Honolulu in 1890. He grew up at Kalia in Waikiki, and co-founded Hui Nalu. In 1911, in Honolulu Harbor, he broke the existing world record for the 100 yard and 220 yard freestyle, blazing the path of his international swimming career.  In the 1912 Olympics, he won a gold medal in the 100-meter freestyle and silver in the relay. Though the 1916 Olympics were canceled due to war, he returned in the 1920 Olympics and won gold medals in the 100 meters and the relay at age 30. He won a silver medal in the 100 meters in the 1924 Olympics (second to Johnny Weissmuller). Finally, he returned as an alternate for the U.S. Water Polo team at the 1932 Olympics.

As Duke rose to stardom as the first well-known Native Hawaiian athlete, he toured internationally with the American Red Cross to give swimming exhibitions to build wartime morale for the nation. During these travels, Duke gave surfing exhibitions seeding interest in the sport and its birthplace around the world. He relocated to Southern California in the 20s and was involved in more than thirty Hollywood films while contributing to the popularity of surfing there. In 1925, he also helped save the lives of eight men from a capsized vessel off of Newport Beach.

Duke ultimately returned to Hawaii where he was elected Sheriff of Honolulu for thirteen consecutive terms, a role which included responding to various community needs and organizing volunteers. The Sheriff position was eliminated when Hawaii became a State, and Duke was appointed the Official Ambassador of Aloha, a role he had been filling unofficially for years as host to various visiting dignitaries.  In 1956 the Governor and Hawaii Chamber of Commerce awarded him the Order of the Splintered Paddle, Hawaii’s highest honor which dates from days of King Kamehameha I. The Outrigger Canoe Club, of which he was a member since 1917,  granted him lifetime membership and awarded him the club’s first ever Winged “O” in his final year of life. When he died in 1968 at age 77, thousands of people lined the streets and beaches of Waikiki to bid Duke farewell. Duke’s most impactful legacy may be in the many youth he mentored throughout his life, coaching them in surfing, canoe paddling, sailing, volleyball, and swimming, while teaching them about the aloha spirit.

Learn more about Duke Kahanamoku from this timeline.