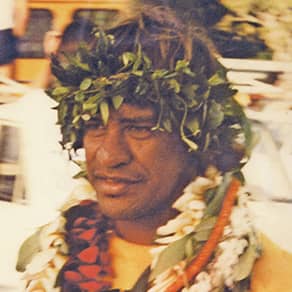 A cultural icon who transcends the world of water sports, Eddie Aikau was an inspiration to many and epitomized the drive and dedication it takes to be a waterman. Eddie was a world-renowned surfer whose big-wave charging helped him win the 1977 Duke Invitational Contest at Waimea Bay. His exploits on the North Shore earned him legendary status amongst his fellow surfers. As the first lifeguard who patrolled the North Shore, not a single life was lost under his watch. Eddie was also active in the Hawaiian cultural renaissance of the 70s. Tragically, Eddie was lost at sea during a Polynesian Voyaging Society expedition from Hawaii to Tahiti in 1978 after the Hokulea capsized twelve miles south of Molokai. Eddie left on a surfboard to seek help for the stranded crew. His selfless commitment to protect people no matter the cost is immortalized in the slogan, "Eddie would go."