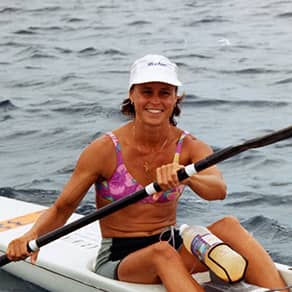 Kelly Fey epitomizes the essence of a Hawaiian Waterwoman. Many people may not know how much she has accomplished, but given her humble spirit, that seems to be just fine with her. An athletic champion at multiple disciplines of paddling, and a champion for her community at the deepest level, Fey has always competed with Aloha while giving back, always inspiring others to give their best.  Soft spoken and always listening intently, she looks for the deeper connections we all share.

Kelly Fey has won multiple solo-craft Molokai Channel World Championships in both the Kayak and OC-1. In fact, she has won six Molokai-to-Oahu kayak crossings and two on a one-person outrigger canoe. Fey was also a member of twelve Nā WāhineO Ke Kai team titles; eight as a vital crew member and four as the coach of the vaunted Team Bradley. Nā Wāhine pioneer Auntie Rosie Lum once marveled at the incredible span of Fey’s career, sharing that Lum had once paddled with and mentored Fey early in her formative years, and later watched her return the favor by mentoring, paddling with, and coaching her daughter Mahealani LumBothelo. Her passion for her sports is matched with her love for her teammates, the community, and our environment.  She has coached both kayaking and canoe paddling at Kamehameha Schools, mentors and coaches at her home canoe club of Hui Nalu, all the while organizing and training the top team in the sport of women’s paddling, Team Bradley, which continues to set the bar across the Kaiwi Channel, continuously breaking and setting their own record finish times.

Fey’s focused energy and ability to galvanize others to achieve important community contributions helped realize the Kaiwi Coast Run & Walk, a fundraiser now in its eighth year. An idea she pitched to her canoe club and helped bring to fruition with others, the event draws the community together to enjoy a morning run/walk of the Kaiwi Coast and raise funds for important community and environmental initiatives. The fundraising brought in by the Kaiwi Coast Run & Walk over the years: assisted in the purchase of the Kaiwi Mauka lands and placement of them into the stewardship of the Livable Hawaii Kai Hui; funded the Hawaii Kai Lions Club to place rescue tubes on beaches and shorelines without lifeguards which have aided in the saving of lives in the Spitting Caves area of Portlock; created Maunalua.net, a free online resource dedicated to archiving and researching Moolelo of East Oʻahu; and assisted in the purchase of Kanewai Fishpond, through the Maunalua Fishpond Heritage Center. The fundraiser has also allowed Hui Nalu to take care of its own maintenance needs and invest in its sailing canoe programs. 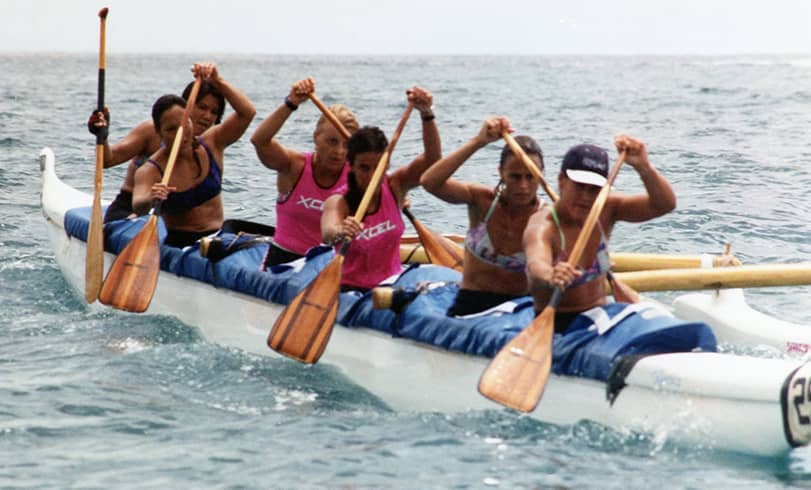