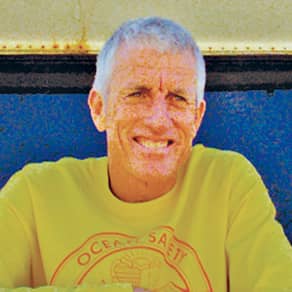 Mark Cunningham’s waterman roots were formed in the waves of Oahu’s South Shore, but it was on the North Shore where his life-saving skills and wave-riding achievements became legend. Think of Pipeline, and many North Shore devotees still see Mark manning the stand and watching over all who dare challenge one of the world’s most intimidating surf breaks. In a 30-year career with the City & County of Honolulu Ocean Safety and Lifeguard Services Division, featuring 20 years at Pipeline, Mark saved lives while imparting his wisdom to kama‘aina, visitors, and future generations. He founded the O‘ahu Junior Lifeguard Program, teaching ocean skills training, respect for the ocean, and malama for the beach. It was also on the North Shore where Mark became the world’s best bodysurfer, winning more than 15 championships. His first title came during high school and his last after age 40. Committed to protecting the North Shore from large-scale development, Mark helped found Defend O‘ahu Coalition, a grassroots organization inspired by the rally cry, Keep the Country Country! North Shore lifesaver, bodysurfer, and community champion – it’s the essence of Mark Cunningham.