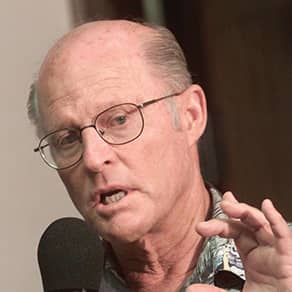 Ricky has the unique distinction of being widely acclaimed for his work as a marine scientist – and yet is better known as a big-wave surfer. Ricky took on the huge surf of the North Shore in the 1950s and 1960s and conquered them all, earning the admiration of surfers worldwide. A highlight was winning the International Duke Kahanamoku Invitational Surfing Contest in 1967 – considered the world championship of big surf – at Sunset Beach in 18-foot waves. As good as Ricky was at surfing, his work as a marine scientist has been more important to Hawai‘i’s ocean community. As a Professor of Oceanography at the University of Hawai‘i, Ricky has done extensive research on coral ecology. His work has helped all of us realize how important it is to protect the ocean and its marine life.