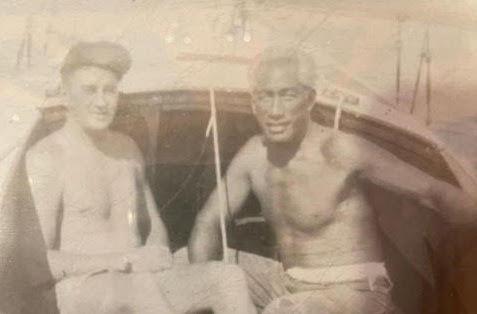 For Cappy Sheeley, “Duke Kahanamoku was just a regular guy, I didn’t realize his accomplishments until later in his life. Duke never talked about his past; he was focused on having fun in the present.”

Cappy - an accomplished waterman in his own right - practically grew up at the Waikiki Yacht Club. He recently spoke with ODKF about some of his encounters with Duke. “I don’t think he ever really understood the status he held. He was always willing to help out at the yacht club… sweeping the floors around the workshop and doing simple chores when he got older. He just wanted to be a regular guy.”

Cappy spent many days of his youth wandering around the club looking for adventure. As a child, Cappy looked up to Duke for both guidance and inspiration. He was entranced by Duke’s aura and competence on a sailboat.

“Duke doesn’t get enough credit for what he did for sailing,” says Cappy, “I didn’t ask many questions when I was a kid, but looking back on it, I wish I had.”

We often circle in on Duke’s achievements in swimming, paddling, and surfing. We tend to glance over his other endeavors. Cappy’s words serve as a reminder that Duke was a waterman in all facets, whose legacy is not only tied to competition but to the ocean itself.

Not only did Cappy speak to what he saw around the club, but he also shared some personal stories about Duke.

“When I was 12 or 13, I hung around the dry storage area helping people launch and haul out their boats. One morning I saw Woody Brown and Duke setting up Woody’s new catamaran, a Manu Kai 20, which he had designed, getting ready for a sail. I helped them put it in the water and when Woody asked me if I wanted to join them, I said 'YES!' Woody told me to ask my Dad if I could go. I tried to assure him that it was not a problem, when Duke stepped in with authority and said, 'Go ask your Dad!' With my head down I turned and went back to the club to ask my Dad. I knew if my Dad said no I would still tell them that he said it was okay. Fortunately, he said yes so I joined them.  We sailed up to Black Point then turned around and came back surfing all the way. Woody and Duke were having a discussion about the best and fastest way to pass waves. This was way over my head as my experience was only trying to catch waves while sailing a monohull. However, I really enjoyed the speed in this catamaran.”

Woody Brown, a member of the Hawaii Waterman Hall of Fame, is widely credited with designing and creating the first modern catamaran, like the ones commonly seen on Waikiki beach.

“When Duke received his orange Manu Kai 20 - I asked him why orange, he said 'safety' - this was way before Coast Guard Orange - he asked me to sail with him in the summer races.  In our first race he realized that I wasn’t strong enough to pull in the main sheet tight enough for his satisfaction.  He made an adjustment and had me steer while he gave me directions. We won a few races over the summer and came in about second or third for season points.  Woody was first.”

Regarding Duke's nature, Cappy says, “I never, not even once, heard Duke speak a negative word about another person. That made a big impression on me.”

And as far as his best memories with Duke, “It would have to be sailing with him. He was just so much fun to sail with and be around.”

May we all follow Duke’s example of character.  We often think of telling our keiki about important lessons and morals.  Sometimes we forget that it’s our actions that they watch so closely.  Let’s remember that our actions have the largest impact.