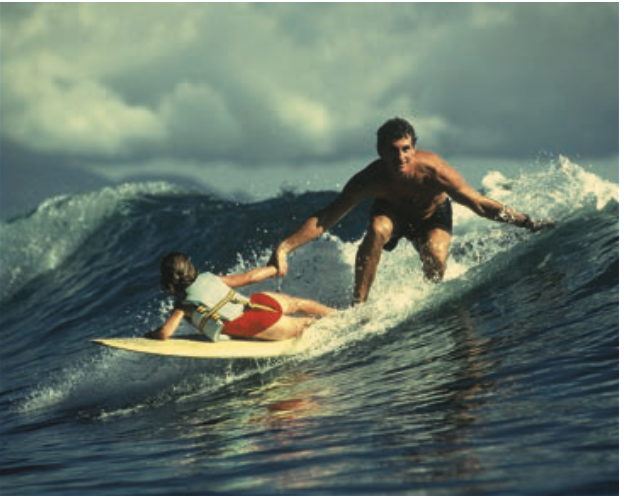 Cappy is a Native Hawaiian born in 1942. He grew up in the Makiki area of Honolulu and graduated from Punahou High School. He’s been married
to Sandy for 35 years and has one daughter Jenna and 4 grandchildren. Cappy’s father Jerry was a founding member of WYC and Cappy learned to swim at the age of 7 off the wharf here at the Club.

Cappy learned to sail here at the Club and purchased an El Toro in 1952.Because we had no Junior sailing program at the time, he went across
to Hawaii Yacht Club to learn his trade with them. He also surfed a little, paddling out from the beach park to Waikiki and watching and learning from Joey Cabell, Paul Strauch, and Albert“Rabbit” Kekai. In addition to sailing and swimming he worked as a lifeguard for the County, and for Hawaiian Village.

Cappy’s Mom Mona and Dad were friends with Duke and Nadine Kahanamoku and Cappy grew up around them at the Club. Around theage of 12 he was out in the old haul out area watching Duke and Woodbridge Parker “Woody” Brown (Woody Brown catamarans Honolulu) rigging a Manu Kai class 20’ catamaran. Woody asked Cappy if he’d like to go sail with them. Saying yes of course he remembers Duke saying “Cappy go ask your dad.”

Obviously excited, he walked back towards the Club to seek permission but started to think “what if my dad says no?” “Should I lie if the answer is no so
I can go?” Well, he did give permission and Cappy went out with them. Sailing out up to Black Point and back here members how fast the two of them were able to get the Manu Kai running. Listening to them talk about the best course to take to go over the waves.Cappy sailed many more times with Duke, steering the Manu Kai while Duke worked the main sheet.

Cappy traveled to Europe with John Weiser, the owner KUMU radio, to race in International Tornado championships.He was fortunate to have the friendship and financial backing, and traveled to Denmark, Germany, Australia, Canada, New York, and Florida racing Tornado /catamarans. John and Cappy were also instrumental in bringing the Tornado’s to Hawaii.

Cappy began swimming at Punahou School, where he was named a highschool All-American in 1959, continued at El Camino College (CA), where he was a junior college All-American in1 962 and 1963, and qualified for the US Olympic swimming trials in 1964 in the 100-meter and 200-meter butterfly. In the 1990s he began swimming in US Masters, setting numerous age group records, and in 2002 at the Nationals he won the 100 fly and set a national record in the 400 IM. In 2007 he won the 50 fly, setting a new national record. He also dominated open water races in Hawaii with numerous age group wins in the Waikiki Rough Water Swim and the North Shore Swim Series. He was inducted into the El Camino College Hall of Fame in 1993 and inducted into the Hawaii Swimming Hall of Fame class of 2008*.
‍

Cappy started paddling relatively late, at the age of 27 (1969). He went to where Hui Nalu and Healani Canoe Clubs used to be side by side up the Ala Wai Canal. On day one he sat between the two clubs literally “on the fence” as they were side by side. Neither team acknowledged him. On the second day, a coach from Healani asked him if he wanted to paddle. Cappy jumped in and was fortunate enough to be with a group of 8 other great men and won the Molokai Hoe race across the Kaiwi channel in 1970 and 71. He has since raced across the channel approximately 15 times. Cappy enlisted in the Coast Guard and served for 7 1⁄2 years here at Sand Island. After the Coast Guard he started a Fiberglass Shop where he was a broker / dealer in sailboats, fiberglass repair and canoe fabrication. He also worked for the Chart House Chain (different company than Joey’s at the Ilikai) on Maui, and in Idaho and California.
‍

Cappy was quick to point out those who influenced his life as a youth:

‍
1. Woody Brown who took his engineering skills and translated them into sailing.
2. Staff Commodore Alvin “Al” Majoska for instilling rules and discipline to him.
3. Ray Rietow for teaching techniques while Cappy rowed members to boats that were anchored off the Club.
4. Nathaniel “Taffy” Sceva for being a father figure and about making good life decisions
5. Healani coach Richard “Baby” Bell for stressing the importance of teamwork
6. His Head Coach at Punahou Roland “Rolly” Higgins for instilling discipline and teaching technique
7. Assistant coach and big wave surfer Peter Cole teaching him preparation for practices and competition.
‍

A competitor in over 7 Transpacific Yacht Races, Cappy is quick to share he has been able to do the things he has because of the opportunities provided by Waikiki Yacht Club and can’t imagine where he might be or the path he would have taken without the influence of so many members. Cappy’s message – Waikiki Yacht Club retains all the potential in the world. While our demographics may change over the years, it is what we all make it and contribute as Members that make it so special. No other Club provides the opportunities we have.
‍

I did ask Cappy for his real name – He told me, but I think I’m sworn to secrecy so ask him yourself. The nickname “Cappy” comes from his youth. He didn’t have much hair and always wore a cap when going to the beach, and a friend of the family called him Cappy and it stuck.
‍
For more information about the Duke foundation and Waterman’s Hall of fame please click here https://www. dukefoundation.org
‍

Original article at this link: https://www.waikikiyachtclub.com/About/Windward_Beat